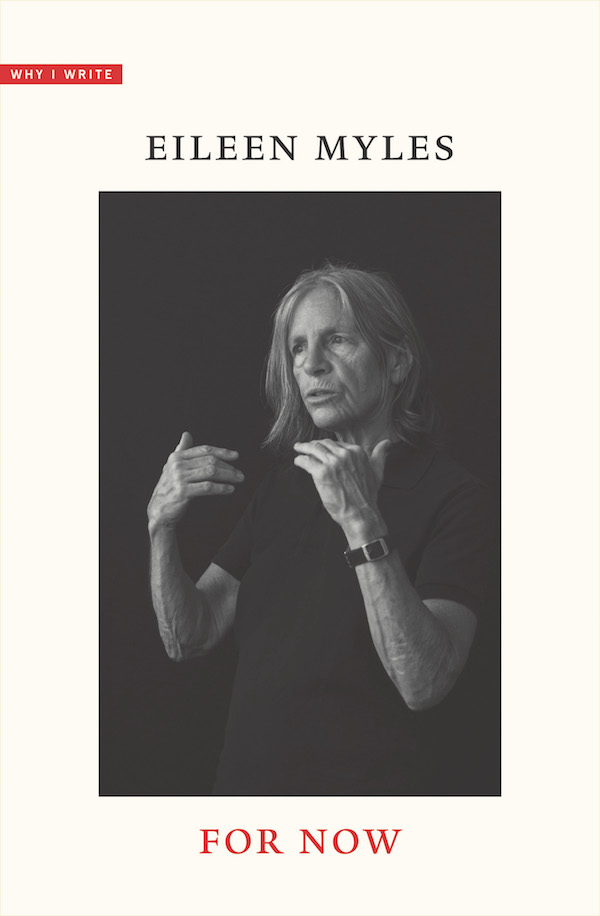 I think last year I got the beautiful bound versions Yale published of Patti Smith and Knausgaard giving this talk and I sat in a chair in my apartment and I took a look at each of them and at least as far as the beginnings both of them sounded like themselves and I thought well I certainly can do that.

When I received the invitation to give this talk, I think it was the summer before last or maybe that spring I was given a date and a fee and I kind of put it at the back of my mind as something nice that would happen the following September or October and then in August I got in touch with Michael because I hadn’t heard anything but it turns out that’s because I had the wrong year. And I figure I can start with that.

Personal digressions and lyrical ruminations from an award-winning writer.

In the latest entry in the publisher’s Why I Write series, lecturer, poet, novelist, performer, and art journalist Myles offers candid, peripatetic reflections on identity, vocation, and, not least, place. The author recounts a protracted struggle to stay in their tiny, rent-controlled apartment in Manhattan’s East Village, home for more than 40 years, after the landlord insisted on a buyout. “The city has taught me almost everything I know about language and existence and being a writer,” Myles reveals. Besides p aying homage to the grit and textures of Manhattan, the author creates a palpable portrait of Marfa, Texas, where, after a brief visit, they bought a house. “Texas felt great because it was deeply unfamiliar,” writes the author. Around 1997, Myles began to sense “something I think of as the archival moment, and before I sold anything I already started to feel the creeping value of the past and the new place the past was playing in the present.” A crisis occurred when Myles lost a box destined for the archive; searching for it involved two psychics, a hypnotist, and astrologers until Myles eventually gave up. The archive — without that box — resides at Yale. Of choosing a career as a writer, the author admits that in their 20s, “I discovered that to be real was an interior project” that involves “a kind of aesthetic experience I believe that precedes the work so that you kind of fail into it finding your style and content and opportunity all together at last and that’s happened enough times for me to believe that that’s my process.” As for gender identity, “I’m so obviously a lesbian,” Myles writes, “I don’t even call myself a lesbian anymore. I say queer, or trans. I say they but none of that matters.”